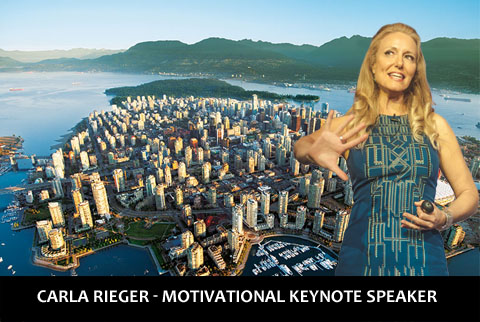 Motivational and Inspirational Keynote Speaker in Vancouver, BC, Canada, Carla Rieger is an internationally-known entrepreneur, coach and author, who travels all around the globe, to places like London UK, Madrid, India, Dubai, Singapore, New York and Vancouver. She offers advice to companies and individuals on how to increase their resiliency and creativity so they can speed up their pace of innovation therefore staying more competitive and relevant in the marketplace.

Vancouver has many excellent conference centers and facilities, including:

General Information about Vancouver for Meeting Planners and Event Professionals

Vancouver, a major seaport city in British Columbia, is one of Canada’s densest and most ethnically diverse cities. The Vancouver metropolitan area is the third largest in Canada, with a population of approximately 2.5 million. In the past, the city hosted highly important international events, including the British Empire and Commonwealth Games (1954), the World Police and Fire Games (1989, 2009), the Winter Olympics and Paralympics (2010), and several matches from FIFA Women’s World Cup (2015). Vancouver’s main industry is forestry, followed closely by tourism (with over 10 million visitors each year) which contributes approximately $4.8 billion/year to its economy and supports more than 70,000 jobs. Some of the city’s most famous tourist attractions include the Stanley Park, the Queen Elizabeth Park, the Van Dusen Botanical Garden, and the large variety of mountains, forest and parklands surrounding the city. Other important industries include software development, biotechnology, video game development, and aerospace. Vancouver is also renowned for being one of the largest film and television production centres from North America, as well as for its focus on lifestyle and health culture, represented by world-famous brands such as Lululemon, Kit and Ace, Herschel Supply Co., Aritzia, Reigning Champ and Nature’s Path Foods.

Vancouver is a major venue for many famous international conferences and conventions including: the KNOWHOW conference, an event dedicated to brands and retailers aiming to develop their marketing skills; the Open Source Summit, North America, a leading conference for developers, technologists and architects; the Vancouver International Travel Expo, where travel opportunities around the globe are presented and discussed; the TED Conference, a world-famous annual event focused on technology, education and design; the iTech Conference & Exhibition, Canada’s leading conference about information technology; and the Vancouver Fall Home Show, featuring interior design companies, remodeling contractors and landscaping companies.

There are a number of highly rated tourist attractions to visit after your business conference in Vancouver, Canada. Some of the most important ones include: the Van Dusen Botanical Garden, a 55-acres space containing more than 7,500 plant species; the Vancouver Lookout, a tower over 130 metres high located in the Harbour Centre, from which you can see the entire city; Dr. Sun Yat-Sen Classical Chinese Garden, the first authentic Chinese Garden ever constructed outside of China, famous for its wonderful paths and harmonious architecture; and the Vancouver Art Gallery, a renowned museum containing acclaimed collections of national and international contemporary art.