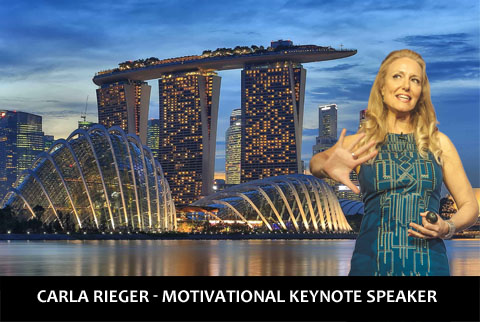 Motivational and Inspirational Keynote Speaker in Singapore, Carla Rieger is an internationally-known entrepreneur, coach and author, who travels all around the globe, such as London, Dubai, Madrid, Singapore, New York and Vancouver. She offers advice to companies and individuals on how to increase their resilience and creativity so they can speed up their pace of innovation therefore staying more competitive and relevant in the marketplace.

Singapore has many excellent conference centers and facilities, including:

General Information about Singapore for Meeting Planners and Event Professionals

Singapore is a sovereign city state located in the south of Malaysia and consisting of 63 islands. It is an important international financial centre with a highly multicultural population and is considered to have one of the freest, most innovative, competitive, dynamic and business-friendly economies in the world. Singapore is famous for its information and communication technologies (ICT) and it contains more than 7,000 multinational companies from the United States, Japan, China, Europe, and India. Approximately 44 percent of the workforce in Singapore consists of non-Singaporeans. The city state is ranked 5th on the UN Human Development Index, along categories such as healthcare, education, life expectancy, quality of life, housing and personal safety, and it has the 3rd highest GDP per capita in the world. Regardless of its relatively small size, Singapore has a large diversity of languages, religions, and cultures. There are four official languages (English, Malay, Mandarin Chinese, and Tamil) and almost all the inhabitants are at least bilingual. The most practiced religion is Buddhism (33% of the population), followed by Christianity, Islam, Taoism and Hinduism. Some of Singapore’s most important landmarks include the colonial centers on the Padang, the City Hall (famous for its 18 Corinthian columns), and the red and gold Buddha Tooth Relic Temple from the city’s Chinatown.

Singapore is a major venue for international conferences and conventions. Some of the most important ones include: the ContentAsia Summit, an event focused on issues impacting Asia’s content industry; the Bloom Conference, a women-oriented event attracting a very large public; Power Week Asia, a conference and summit about electric power and electric industry; the Singapore Blockchain Conference, one of the most important global technology events; the YOW! Singapore Conference, a venue for software developers from all over the world; the Singapore Global Summit, an event dedicated to the global corporate travel community; and Sprint Starts, another conference dedicated to women entrepreneurs.

There are a number of highly rated tourist attractions to visit after your business conference in Singapore, including: the Singapore Zoo, considered the world’s best rainforest zoo, with a large collection of animals including chimpanzees, zebras, meerkats, mole rats, white tigers, kangaroos, a komodo dragon and many others; the Chinatown neighborhood, which contains, besides a large variety of traditional Chinese shops, also a Chinese Heritage Centre and two wonderful temples, the Sri Mariamman Hindu Temple and the Buddha Tooth Relic Temple; and the Marina Bay Sands, an opulent resort complex including a luxury hotel, an enormous mall, the ArtScience museum, and the Marina Bay Sands Skypark, from where you can see the entire city.