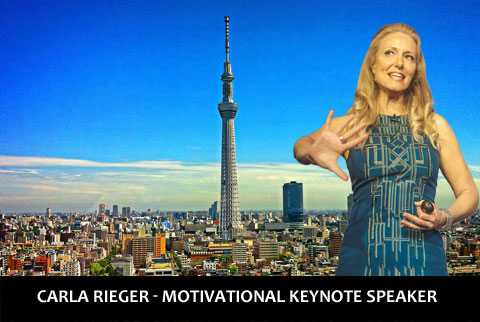 Carla Rieger is an internationally-known, motivational keynote speaker and expert on strategic, brand storytelling for business. She helps individuals and companies engage listeners, increase sales and make brands go viral through –strategic storytelling. She  travels  the globe, to such places as Tokyo offering practical advice in an entertaining way, that people remember and use.
Each keynote or breakout session is a deep learning experience with potent brain research, entertaining stories, and strategies for a measurable increase in results. Enjoy an insightful, fun, presentation applicable to diverse audiences around the world.
During her 24-year career, she worked with top entrepreneurs, leaders and companies. From United States to Canada to Europe, Middle East and Asia, Carla helps individuals and organizations to unleash their creative potentials, so they can stand out in the marketplace.
Carla is a rare find as an internationally-known female speaker. These days top meeting planners try to find a 50/50 balance of men to women on their stage, especially if their audience is at least half female.
Carla has also written six books, including “Storytelling in Business” and “MindStory Inner Coach”, plus hundreds of articles and over 80 online learning programs. In addition, she has 24 years as an organizational change and communication expert, and 10 years experience in the performing arts, specifically comedy. Over the last 20 years she has spoken to over 1500 groups on 4 different continents.
Just a few of the companies Carla Rieger has worked with:

Tokyo has many excellent conference centers and facilities, including:

General Information about Tokyo for Meeting Planners and Event Professionals

Tokyo, the capital city of Japan, is a huge metropolis with over 39 million inhabitants. It is ranked first in the Global Economic Power Index and 3rd in the Global Cities Index and is a major international financial centre, housing the headquarters of some of the world’s largest insurance companies and investment banks. It is a major hub for Japan’s electronics, broadcasting, transportation and publishing industries. Tokyo became a leading financial centre in the 1960s and is considered one of the three ‘command centres’ for global economy, together with New York and London. The city is also highly famous for its cuisine, being awarded by the Michelin Guide with more stars than any other city in the world (about twice as many as Paris). Since Tokyo was left in ruins both by the 1923 earthquake and the World War II bombings, its architecture is mainly modern. Some of its most famous architectural landmarks include the Tokyo International Forum, the Asahi Beer Hall, the Mode Gakuen Cocoon Tower, the NTT Docomo Yoyogi Building, the Rainbow Bridge, as well as its famous skyscrapers, the Tokyo Tower and the Tokyo Skytree. Tokyo is home to many famous museums such as the Tokyo National Museum, the Edo-Tokyo Museum, and the National Museum of Western Art.

Tokyo is one of the world’s largest hubs for international conventions and conferences. Some of the most famous ones include: the Global Marketing Conference, one of the world’s largest marketing and management events; the Open Source Summit Japan, a world-leading conference for open source industry leaders and technologists aiming to share information about innovative open solutions; Tech in Asia, a conference showcasing the most promising startups; the Asian Conference on Education (ACE), an interdisciplinary event where the latest educational theories and methods are discussed; the STD Asia Pacific, a healthcare congress focused on infectious diseases; and the World Blockchain Roadshow, an important technology event.

There are a number of highly rated tourist attractions to visit after your business conference in Tokyo, Japan, such as: the Imperial Palace, with its beautiful 17th century parks surrounded by high walls; the the Sens?-ji Temple, Tokyo’s most famous shrine established in 645 CE and dedicated to Kannon, the Buddhist goddess of compassion; the Ueno Park, the city’s largest green space, containing a zoo, an aquarium and many temples and museums; and the National Museum of Nature and Science, one of Japan’s oldest museums, dating back to 1871, located in Ueno Park and hosting a large collection of materials related to science and natural history.