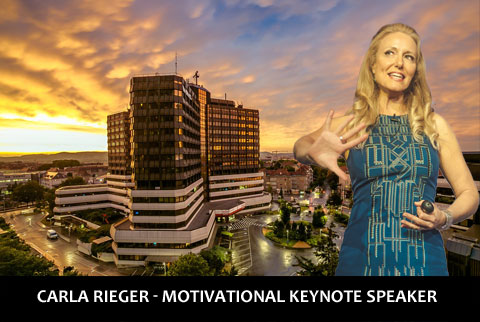 Motivational and Inspirational Keynote Speaker in Vienna, Carla Rieger is an internationally-known entrepreneur, coach and author, who travels all around the globe, to places like London UK, Madrid, India, Dubai, Singapore, New York, Dallas, Los Angeles, Chicago, Toronto, Barcelona, Amsterdam, Dublin, Cape Town, Sydney, Wellington, Cancun, Las Vegas, Stockholm, Helsinki, Frankfurt, Budapest, and Vancouver. She offers advice to companies and individuals on how to increase their resiliency and creativity so they can speed up their pace of innovation therefore staying more competitive and relevant in the marketplace.

Vienna has many excellent conference centers and facilities, including:

General Information about Vienna for Meeting Planners and Event Professionals

Vienna is the capital city of Austria and is located in the Danube River on the eastern side of the country. It is the seventh largest city from the European Union, with a population of 1.8 milion (2.6 million in the larger metropolitan area) and is the economic, political and cultural centre of Austria. It is an international hub for both national and foreign companies, and its economy relies heavily on the service sector, as well as on industry, commerce, trade, scientific and technological services, real estate, and manufacturing.

Vienna is also home to several international organizations, including the United Nations and OPEC, and to multinational companies such as Johnson & Johnson, Siemens, Roche, Philips and Boehringer Ingelheim. Architecturally, it is a very diverse city, combining a variety of styles such as Baroque (the Karlskirche), Romanesque (the Ruprechtskirche), combinations of modern architectural elements with old buildings (such as the remodeling of the old Gasometer), or Art Nouveau. Some important landmarks include the Imperial Palaces, especially Schönbrunn, the summer residence of the Habsburgs, and the 19th century Ringstraße containing imposing buildings, monuments and parks. The city has a strong artistic and intellectual legacy, shaped by past residents such Mozart, Beethoven and Freud. Between 2005 and 2013, it was the world’s number one venue for international conferences and congresses.

Between 2005 and 2013, Vienna was the world’s number one destination for international congresses and conventions. In 2014, 202 international conferences were held in Vienna, making it the second most popular congress location worldwide according to the statistics of the International Congress and Convention Association. Its largest conference centre, the Austria Center Vienna (ACV) has a total capacity for around 20,000 people and is situated next to the United Nations Headquarters in Vienna. Other centres are the Messe Wien Exhibition & Congress Center (up to 3,300 people) and the Hofburg Palace (up to 4,900 people).

Vienna is one of the world’s leading conference and convention venue, famous for its conference centres such as the Austria Centre Vienna (with a capacity of 20,000 people), the Messe Wien Exhibition & Congress Centre (up to 3,300 people) and the Hofburg Palace (up to 4,900 people). Some important conferences taking place here include: the D2 conferences, one of the largest meetings of architectural visualization artists from the globe; Accelerate, an important event about digital transformation; the WeAreDevelopers AI Congress, a major venue for software developers and Artificial Intelligence specialists; the Legal Tech Conference, an event exploring the connections between law and technology; and the Moving Forward Conference, focused on innovation, business, technology and startups.

There are a number of highly rated tourist attractions to visit after your business conference in Vienna, Austria, such as: the St. Stephen’s Cathedral (Stephansdom), a huge cathedral with over 18 altars, inaugurated in the 12th century and currently home to the Catholic archbishop of Vienna; the Burggarten, a wonderful garden which was the court garden for Habsburg rulers, containing landmarks such as a memorial statue of Mozart, the Palmenhaus, a breathtaking glass palm house, and the Schmettlerlinghaus, where you can see a large number of tropical butterflies and bats; the Belvedere Complex, consisting of several palaces and an orangery dating back to the 17th century; and the Hofburg Imperial Palace, built in the 13th century and currently home to Austria’s president.