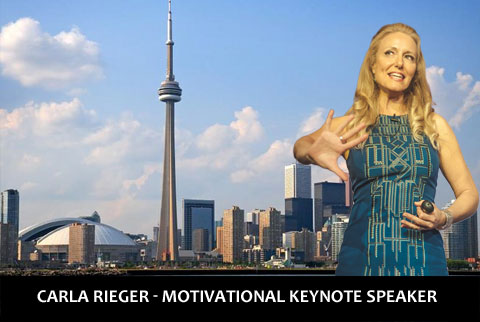 Motivational and Inspirational Keynote Speaker in Toronto, Carla Rieger is an internationally-known entrepreneur, coach and author, who travels all around the globe, to places like London UK, Madrid, India, Dubai, Singapore, New York, Dallas, Los Angeles, Chicago, and Vancouver. She offers advice to companies and individuals on how to increase their resiliency and creativity so they can speed up their pace of innovation therefore staying more competitive and relevant in the marketplace.

Toronto has many excellent conference centers and facilities, including:

General Information about Toronto for Meeting Planners and Event Professionals

Toronto is a major Canadian city located on Lake Ontario’s northwestern shore. It is a dynamic multicultural and cosmopolitan metropolis, with over 160 languages spoken in the city, and a major hub for finances, business, arts, culture and tourism. Its numerous festivals and public events, as well as museums and galleries, entertainment districts, sports activities and national historic sites attract more than 25 million tourists each year. Considered the financial capital of Canada, Toronto has a high density of brokerage firms and banks in the Financial District, on Bay Street. The Toronto Stock Exchange is the seventh largest stock exchange in the world. Besides finances, Toronto is an important centre for technology, design, education, business services, food services, environmental innovation, life sciences, fashion, arts and media. A major local industry is represented by film production. Since 2011, Toronto is the third largest production centre for cinema and television after Los Angeles and New York, and is home to the famous Toronto International Film Festival. Architecturally, Toronto is very diverse, containing both buildings dating back to early 19th century and very new constructions, such as its many skyscrapers and high-rise buildings including the CN Tower, which is the tallest free-standing construction in the Western Hemisphere.

Toronto is a major centre for international conferences and conventions. Some of the most important ones include: the Big Data Toronto Conference & Expo, Canada’s number one conference about data industry, advanced machine learning, privacy, cybersecurity and cloud analytics and computing; the AI Toronto Conference & Exhibition, the largest event about Artificial Intelligence in Canada; the Toronto Entrepreneurs Conference, dedicated to assist business leaders from the Toronto Area forge new connections; Conex: The Content Experience, a series of meeting aiming to advance the practice of online marketing; and the Social Finance Forum, a venue for over 500 investors, entrepreneurs, charity leaders and finance professionals eager to reshape the market.

There are a number of highly rated tourist attractions to visit after your business conference in Toronto, Canada, including: the Royal Ontario Museum, home to an outstanding collection of artworks from all over the world and from various historical periods; the Casa Loma, an amazing building with over 100 rooms resembling a medieval castle; the Toronto Zoo, with a collection of several thousand animals divided into sections, each representing a major region of the globe, most famous for its African Savannah and Great Barrier Reef collections; and St. Lawrence Market, built in 1950 and housing a large variety of vendors of food products, flowers as well as specialty items.