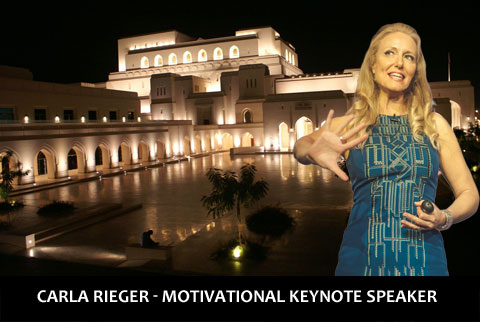 Motivational and Inspirational Keynote Speaker in Muscat, Carla Rieger is an internationally-known entrepreneur, coach and author, who travels all around the globe, to places like London UK, Madrid, India, Dubai, Singapore, New York, Dallas, Los Angeles, Chicago, Toronto, Barcelona, Amsterdam, Dublin, Cape Town, Sydney, Wellington, Cancun, Las Vegas, Stockholm, Helsinki, Frankfurt, Budapest, Vienna, Zürich, Prague, Copenhagen, Brussels, Athens, Bucharest, Lisbon, and Vancouver. She offers advice to companies and individuals on how to increase their resiliency and creativity so they can speed up their pace of innovation therefore staying more competitive and relevant in the marketplace.

Muscat, Oman has many excellent conference centers and facilities, including:

General Information about Muscat for Meeting Planners and Event Professionals

Muscat is the capital and most populous city of the Sultanate of Oman, with a population of over 1.5 million inhabitants. It is an important port city located close to the Arabian Sea along the Gulf of Oman and near the Strait of Hormuz. Muscat is a major commercial, economic and financial centre, with an economy largely dominated by trading. Some of the most important companies headquartered in the city include the Suhail Bahwan Group, the Saud Bahwan Group, Zubair Automotive, the Muscat Securities Market (Oman’s principal stock exchange), Galfar Engineering and Oman Air. The city is also a major tourist destination, attracting annually a large number of tourists. Some of its most visited landmarks include the Al Jalali Fort and Al Mirani Fort, built as prisons in the 16th century during the Portuguese occupation and currently acting as museums, the Qasr Al Alam Royal Palace, an imposing palace, home to the Sultan of Oman, the Sultan Qaboos Grand Mosque, the third largest mosque in the world, as well as numerous amazing museums, such as the Bait Muzna Gallery, the Bait Al Zubair, the National Museum, the Natural History Museum, the Omani French Museum, the Children’s Museum, and the Sultan’s Armed Forces Museum.

Muscat has become a great centre for conferences and conventions during the last years. Some important events taking place annually include: the Oman Health  Exhibition and Conference, an international event focused on the development of the healthcare industry, health products, services, facilities, and opportunities for new developments, trade and investments in Oman; the World Heavy Oil Congress and Exhibition (WHOC), an opportunity for industry professionals to secure new business opportunities and engage in dialogue with key stakeholders across the global heavy oil value chain; and the Oman Real Estate Exhibition (OREX), the most important event trade and investment platform in Oman for local and international companies.

While you are attending a business conference in Muscat, Oman, a few local restaurants to experience include: the Kargeen Restaurant (+968 9925 3351), an elegant locale with ethnic interiors, offering tasty homemade cuisine with a touch of vintage Omani culture; Ubhar (+968 24 699826), a cozy Middle Eastern restaurant with great quality local food served with the finest Arabic coffee; the Zahr El Laymoun Muscat (+968 24 543311), a colorful Lebanese restaurant offering very fresh and well prepared dishes in a relaxing and spacious atmosphere; and the Caramel Restaurant & Lounge (+968 22 066668), the classiest American restaurant in town.

There are a number of highly rated tourist attractions that you can visit after your business conference in Muscat, Oman. Some of the most notable ones include: the Sultan Qaboos Grand Mosque, a large contemporary mosque with five imposing minarets constructed in 2001; the Al Alam Palace, the ceremonial residence of the sultan, renowned for its colorful gate with bright blue and gold columns; the Bait Al Zubair, Oman’s main cultural complex exhibiting Omani artifacts such as relics, weapons and costumes; and the Royal Opera House Muscat, a fusion of Islamic-Italianate-style architecture known as Oman’s premier venue for musical arts and culture.