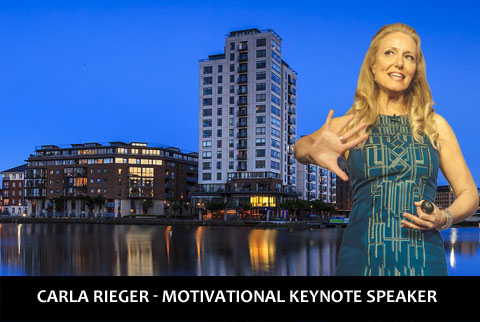 Motivational and Inspirational Keynote Speaker in Dublin, Carla Rieger is an internationally-known entrepreneur, coach and author, who travels all around the globe, to places like London UK, Madrid, India, Dubai, Singapore, New York, Dallas, Los Angeles, Chicago, Toronto, Barcelona, Amsterdam, and Vancouver. She offers advice to companies and individuals on how to increase their resiliency and creativity so they can speed up their pace of innovation therefore staying more competitive and relevant in the marketplace.

Dublin has many excellent conference centers and facilities, including:

General Information about Dublin for Meeting Planners and Event Professionals

Dublin is the capital city of the Republic of Ireland and is considered among the top thirty cities in the world by the Globalization and World Cities Research Network (GaWC). Located on the eastern coast of Ireland at the mouth of the Liffey River, Dublin is the economic center of Ireland and an important site for industry, administration, education and arts. In 2009, it was deemed the 4th richest city in the world (by purchasing power) and the 10th richest by personal income. Renowned international companies such as Google, Amazon, Microsoft, eBay, Facebook, Twitter, Paypal, Yahoo, Pfizer or Accenture have their operational bases and European headquarters in Dublin, the so-called ‘Tech Capital of Europe.’ Dublin is also famous for its historical buildings and monuments, including the Dublin Castle (13th century), and the Dublin Cathedral (12th century). One of its most recent monuments, the Spire of Dublin, also called the Monument of Light, is another impressive landmark. The city hosts a large number of museums and art galleries too, such as the National Gallery, the Irish Museum of Modern Art, the Royal Hibernian Academy, the Hugh Lane Municipal Gallery, or the Douglas Hyde Gallery. Moreover, it is famous for its literary history, producing literary figures such as James Joyce, Samuel Becket, Bram Stoker, Jonathan Swift, Oscar Wilde, William Butler Yeats and George Bernard Shaw.

Dublin hosts a large number of international conferences, conventions and events, many of them focused on technological advances, economics and business. Some of the most important ones are: the SaaStock, focused on building B2B software companies, the UXDX, a conference dedicated to user experience, developer experience, and experience design, the Uprise Festival Europe, an important technology festival with over 2,000 attendants, the Cyber Security Conference and Exhibition, an event in its 8th year already where issues regarding online security are debated, and FutureScope, a conference promoting collaboration and interaction between multinational companies and entrepreneurs.

There are various highly rated touristic attractions to visit after your business conference in Dublin, Ireland. The Dublin Castle, dating from the 13th century, and the Dublin Cathedral, dating from the 12th century, are two of the most visited landmarks. The National Museum of Ireland is the perfect place for learning more about the history of Ireland, whereas the Phoenix Park, one of the largest in Europe, contains other important landmarks such as the Dublin Zoo, the Wellington Monument and the Magazine Fort. Beer fans should definitely visit the Guinness Storehouse where they can not only learn more about this famous beer brand’s history and brewing methods but also drink a complimentary pint at the end of the visit.