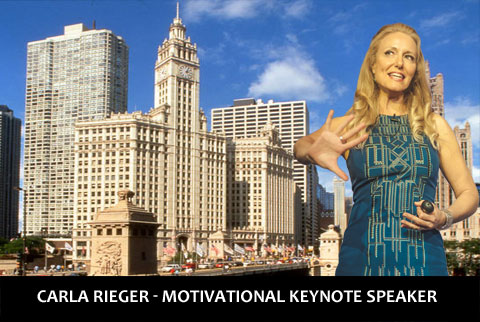 Motivational and Inspirational Keynote Speaker in Chicago, Carla Rieger is an internationally-known entrepreneur, coach and author, who travels all around the globe, to places like London UK, Madrid, India, Dubai, Singapore, New York, Dallas, Los Angeles, and Vancouver. She offers advice to companies and individuals on how to increase their resiliency and creativity so they can speed up their pace of innovation therefore staying more competitive and relevant in the marketplace.

Chicago has many excellent conference centers and facilities, including:

General Information about Chicago for Meeting Planners and Event Professionals:

Chicago is the third most populated city from the United States, after New York and Los Angeles. Its metropolitan area has almost 10 million inhabitants, being the third largest in the US. Positioned along Lake Michigan, Chicago is the region with the largest number of highways and railroads from the United States and is an international hub for commerce, technology, transportation, telecommunications and finance, having the fourth largest gross metropolitan product from the world (approximately $670.5 billion), after Tokyo, New York and Los Angeles. Its major sections include the central business district (‘the Loop’) and the North, South and West Sides. Chicago’s most important sites include the Millennium Park, the Art Institute of Chicago, the Lincoln Park Zoo, the Sears Tower, the Magnificent Mile and the Navy Pier. The Chicago area is also home to many universities and colleges, some of them, such as the University of Chicago, the University of Illinois at Chicago and the Northwestern University, being world famous, especially for their research. The city is a vibrant artistic culture, being renowned for its visual arts, theater (including improvisational comedy), film, and music (the most representative genres being blues, jazz, hip hop, house, and gospel).

Chicago is a major international convention and conference destination, hosting events focused on business, management, industry and health. Its main convention center, the McCormick Place, is the largest conference center in the US and the third largest in the world. Chicago’s major business conferences include the AOA Annual Business Meeting, the Academy of Management Annual Meeting, and the National Investment Center’s Annual Conference. Its most important industry conference is the AREMA Annual Conference & Exposition , and notable conventions focused on health include the Bank of America Marathon and Health & Fitness annual event, and the United Fresh Produce Association Annual Convention.

There are a great number of touristic attractions you can visit after your business conference in Chicago, Illinois. Millennium Park is famous for its works of public art, such as Anish Kapoor’s Cloud Gate or Jaume Plensa’s Crown Fountain, as well as it public art exhibitions during the warm seasons. Museums such as the Art Institute of Chicago, with its more than 300,000 artworks, or the highly interactive Museum of Science and Industry, are other notable landmarks. Chicago is also renowned for its huge, 35-acre Lincoln Park Zoo, where you can admire over 1,200 animals.