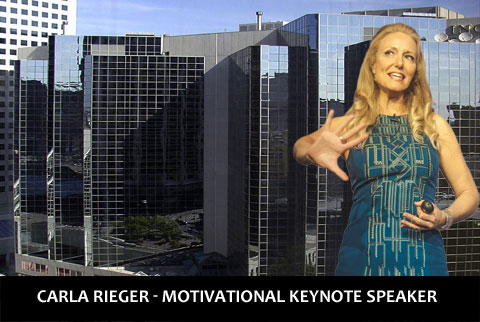 Motivational and Inspirational Keynote Speaker in Calgary, Carla Rieger is an internationally-known entrepreneur, coach and author, who travels all around the globe, to places like London UK, Madrid, India, Dubai, Singapore, New York, Dallas, Los Angeles, Chicago, Toronto, Barcelona, Amsterdam, Dublin, Cape Town, Sydney, Wellington, Cancun, Las Vegas, Stockholm, Helsinki, Frankfurt, Budapest, Vienna, Zürich, Prague, Copenhagen, Brussels, Athens, Bucharest, Lisbon, Muscat, and Vancouver. She offers advice to companies and individuals on how to increase their resiliency and creativity so they can speed up their pace of innovation therefore staying more competitive and relevant in the marketplace.

Calgary, Canada has many excellent conference centers and facilities, including:

General Information about Calgary for Meeting Planners and Event Professionals

Situated at the confluence of the Elbow River and the Bow River, Calgary is a city in the province of Alberta with a population of over 1.2 million (the third largest city in Canada). It is a major centre for finances, energy, transportation and logistics, manufacturing, aerospace, healthcare, retail, tourism and film and television production. In 2015, Calgary boasted with the largest number of millionaires in Canada and is home to a large variety of companies including Acceleware, an important Canadian software development company, the Athabasca Oil Corporation, a well-known energy company, Canadian North, one of Canada’s major airline companies, Shell Canada, one of the country’s largest integrated oil companies, and SEVEN24 Films, a television production company. Calgary is one of Canada’s top tourist destinations, attracting annually over 3.1 million visitors. Some of its most famous landmarks include the Calgary Tower, a 180 metres observation tower, the Devonian Gardens, one of the world’s largest indoor park and botanical garden, and the Heritage Park Historical Village, Canada’s largest living history museum. Calgary is also a notable cultural centre, famous for institutions such as the Glenbow Museum, western Canada’s largest art museum, the Chinese Cultural Centre, the largest cultural centre from the country, and the National Music Centre, featuring a museum and a performance centre.

Calgary is a major centre for a large number of international conferences and conventions, including: ITech, one of Canada’s most important conferences focused on technological developments; the Convergence Conference, a meeting point for national and international experts in all aspects of educational technology; the Genesis Future Summit, a three day event focused on marketing and technology; the SocialWest Conference, an event dedicated to specialists in communications, marketing and social media; the Occupational and Environmental Medical Association of Canada Annual Scientific Conference, one of Canada’s leading healthcare conventions; and the Digital Health Canada / ANHIX Calgary Winter Conference, an event aiming to enable effective community healthcare.

While you are attending a business conference in Calgary, Canada, a few local restaurants to experience include: NOtaBLE (+1 403-288-4372), an upscale restaurant where you can sample a large variety of Canadian dishes; the Bow Valley Ranche Restaurant (+1 403-476-1310), another luxurious locale serving Canadian food and famous for bison, elk and seafood dishes; Native Tongues Taqueria (+1 403-263-9444), an excellent Mexican restaurant; the Jonas Restaurant & Bar (+1 403-262-3302), a quaint and confortable Hungarian restaurant, renowned for its soup, stews and meat dishes; the Santorini Greek Taverna (+1 403-276-8363), a restaurant specializing in Greek cuisine; and the Coup (+1 403-541-1041), one of the best vegetarian restaurants in the city.

There are a large number of highly rated tourist attractions that you can visit after your business conference in Calgary, Canada, including: the Calgary Zoo, a 74 acres zoological garden featuring a large number of animals as well as a park replete with life-size models of dinosaurs; Fort Calgary, the city’s first building constructed in 1875 and currently featuring a diversity of historical displays; the Olympic Plaza, an urban park and gathering place where the 1988 Olympic Winter Games were hosted; and the Bow, an imposing, 236 metres tall skyscrapers, home to the offices of the Encana Corporation and Cenovus Energy.